The challenge of climate change and an ageing population is a double whammy that will have wide ranging socio-economic and environmental impacts.

A new report by the University of York’s Stockholm Environment Institute undertaken together with Community Service Volunteer’s Retired and Senior Volunteer Programme (RSVP) presents the case for better engagement of older people on climate change issues. Older people may be physically, financially and emotionally less able to cope with the effects of climate-related weather events. The report sets out a ten-point plan to better engage older people on climate change issues.

By 2050 people aged over 50 will represent 30 per cent of the UK population compared to approximately 20 per cent in 2006. This demographic group has often been viewed as a group which cannot peform certain skills and activities or are passive, incapable and withdrawn. There is a need to develop different approaches and provide better opportunities to engage older on climate change issues.

The reports sets out the case for the better engagement of older people on climate change issues:

Vulnerability of Older People Older people are more at risk from climate-related threats due to an increased likelihood of deteriorating health that comes with age. Factors such as income, education, social support network and access to social services will determine how well an individual will cope with a climate-related threat.

Carbon Footprint An assessment of age-related carbon footprint suggests that the baby-boomer generation, those who constitute the age group of 50-64 years old, have a high carbon footprint compared to other age groups.

Baby boomers bring higher levels of consumption to middle and later life. They are re-inventing old age basing it on new consumption and leisure-orientated lifestyles, where travel and cosmopolitism are key features. In contrast, those aged 75 plus are coping with increasing care needs and declining health. Energy use in the home constitutes a large part of their carbon footprint – 40 per cent higher than the UK average.

They Want To Do Their Bit In 2008 27 per cent of over 65s participated in voluntary and community activities. As witnessed through surveys, group discussions and recommendations within the Green Alliance’s Older people’s manifesto the older generation want to participate in efforts to reduce their environmental impact.

However, personal contact particularly highlights the lack of awareness of information sources and the difficulty in accessing the appropriate information on actions that are best suited to their personal, social or economic circumstances. Information available is often perceived as being confusing and contradictory. Removal of these barriers, real or perceived, is key to both better engagement of this age sector and achieving sustained involvement.

Social Justice As well as the social justice issue relating to the vulnerability of older people, it needs to be acknowledged that it is important to address and overcome the stereotype of this age sector being incapable of engagement, passive, or disinterested. 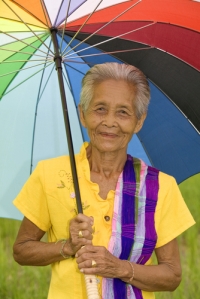 The belief that they are the “missing voice” in the environmental debate was highlighted by Greener and Wiser Taskforce. Similarly the life experience and knowledge of the over 50s mean that they are uniquely placed to comment on government responses to political and economic crises.

The Need for Different Approaches to Participation and Engagement The assumptions and mechanisms used to raise awareness and direct people to advice and information, particularly advocating use of the internet, may not be appropriate for the over 50s. Whilst 25 per cent of internet users are over 50, an estimated 70 per cent of over 65s have never been online. It is also important that interactions are non-threatening and do not arouse fear and guilt.

One example is the need for sensitivity with regard to transport options. Many older age people are more car-dependent that other age sectors. Similarly, there is anecdotal evidence that suggests that the largest growth in the numbers of people flying is in the over 65s. While it is important to draw attention to the carbon impact of these behaviours, it is equally important not to cause individuals to “switch off” and to offer alternative strategies that are better suited to their personal circumstances 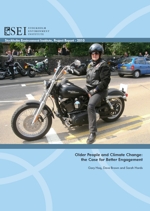 The Report calls for old stereotypes of this age group as being incapable of engagement, passive or disinterested, to be abandoned. It recommends new approaches to engage older people on climate change issues, which promote direct interaction and the use of trusted agents that are sensitive to the personal circumstances faced at their particular stage of life. It outlines ten recommendations to improve and enhance the engagement of older people on issues related to climate change and greener living:
1 Abandon old stereotypes
2 Get to know your target audience
3 Use trusted brands
4 Use peer to peer communication
5 Use positive messages
6 Use the right “frames”
7 Show real life examples
8 Develop an inclusive dialogue
9 Maximise participation
10 Ensure the setting is right for change

Improving and maintaining public engagement and action on climate change is a major challenge. Given the recent growth in public scepticism, it is therefore timely to evaluate existing approaches to engaging the public to ensure they are well-targeted, effective and equitable as possible.